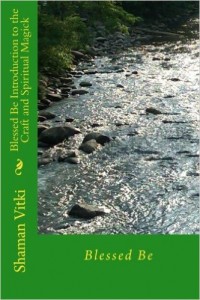 I wrote this book to help answer many of the questions that many people new to the Craft have asked me. The perfect guide to the Craft, Wicca, and spiritual magick! This book covers everything you need to know to practice the Craft and spiritual magick effectively. Includes a detailed bonus section on the 24 runes of the Elder Futhark as well. Covers calling the corners, candle magick, spells, connecting with the elements, moon magick, Sabbats and more.

The pentacle or pentagram is an important symbol in Wicca and witchcraft. It is a circle surrounding a five pointed star. The five points showing the different elements of nature. Those elements are earth, air, fire, water, and spirit. Each element has associations with compass direction as well. Earth is north, air is east, fire is south, water is west and spirit is center.

The triple moon is a Goddess symbol that represents the Maiden, Mother, and Crone as the waxing, full, and waning moon. It is also associated with feminine energy, mystery and psychic abilities.

The Triquetra symbol has different symbolism according to whom you ask. For pagans, the Triquetra represents the threefold nature of the Goddess as
virgin, mother and crone. It also symbolizes life, death, and rebirth and the three forces of nature: earth,air, and water. To some it is a protection symbol. To Christians it represents the Trinity _Father, Son, Holy spirit.

The Horned God symbol represents the masculine energy of the God.

The Septagram symbol or the Elven Star, or seven-pointed star, is found in some branches of the Faerie tradition of Wicca.  However, it has different names and can be associated with many other magical traditions. Some say each point represents a pathway, or the “seven rays of manifestation of the Higher Self. The septagram or (heptagram) is important in Western kabbalah, where it symbolizes the seven planets, the seven alchemical metals, and the seven days of the week.

The eight-spoked wheel, symbolizes the cycle of the year.  Each spoke represents one of the eight Sabbats, Imbolc, Ostara, Beltane, Litha, Lamas, Mabon, Samhain, and Yule.  The significance of the wheel is that there is no beginning or end, it is continual.  We may call January 1st the start of the year, (Though many Witches think of November 1st as the first of the year) but the calendar doesn’t stop, then start up again, it moves from day to day without end.  It’s this unending cycle that the wheel of the year signifies.